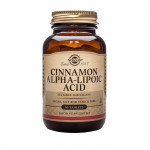 Cinnamon has been traditionally used to support wellness for thousands of years. Alpha Lipoic Acid is an important antioxidant. It helps to generate the primary antioxidant Glutathione and recycles Glutathione, Vitamin C and E and Coenzyme Q10. It also supports healthy nerve function and the metabolism of sugar. Cinnamon and alpha-lipoic acid seem to help to improve and normalize blood sugar levels, promoting cellular sensitivity to insulin. Lipoic acid additionally helps in better utilization of glucose by the muscles, which helps reduce blood sugar levels in the blood and acts as a cofactor in cellular energy production. Also, cinnamon is a rich source of antioxidants and alpha-lipoic acid is one of the most versatile high power antioxidants in the human body.

Cinnamon is used to treat gastrointestinal problems such as bloating, diarrhea and abdominal fluids and for good digestion. It also has strong antioxidant and anti-fungal action. Its most important feature is that it improves the body's ability to make better use of insulin and glucose, while at the same time normalizing lipid levels. Lipoic acid enhances the use of glucose by the muscles and reduces blood sugar levels.

SUGGESTED USE: As a dietary supplement for adults, take one (1) tablet four times daily, preferably with meals, or as directed by a healthcare practitioner.